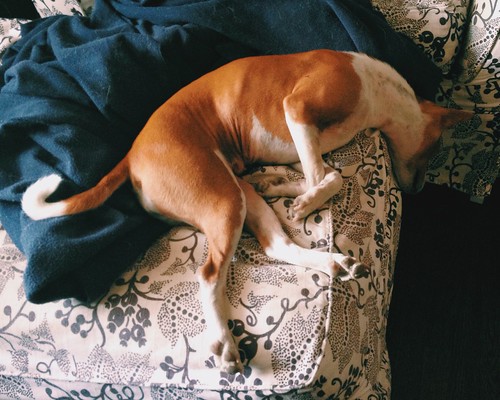 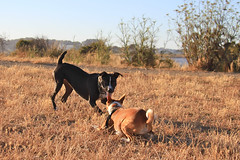 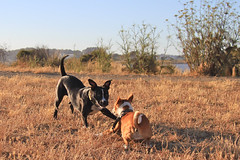 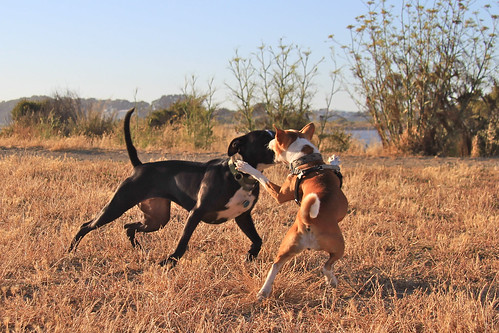 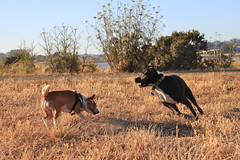 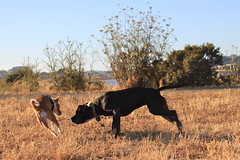 The pit bull’s owner was very conscientious about how rough her dog was playing with Bowpi, due to her size. “Is this okay? Can your dog play like this?” she kept asking. I forget sometimes that many people see Basenjis as “small” dogs, because they don’t display the kind of frailty one associates with toys and minis.

Bowpi does get overwhelmed by larger dogs pretty quickly, particularly during chase. She’s good at outrunning them in short bursts, but can’t quite match their stamina when they keep pursuing and eventually catch up and knock her over. This pit bull was just charging in on her terms though, persisting in roughhouse instead of actual chase. Yet, it seemed she was holding back and playing rather loosely, as far as I could tell from watching bullies play before. And to my surprise, Bowpi was actually reciprocating.

Like I told the pit bull’s owner, Bowpi can handle her own until she doesn’t want to anymore, and then she’ll make it clear when she’s had enough. 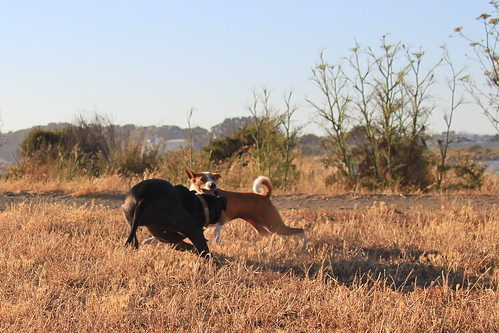 On that day, I realized that when Bowpi gets overwhelmed, one of her strategies (as a reader once suggested) really is to deliberately lead the overly exuberant pursuer into Bowdu. I used to think his refereeing was obtrusive, that he was being the killjoy to her chase games. 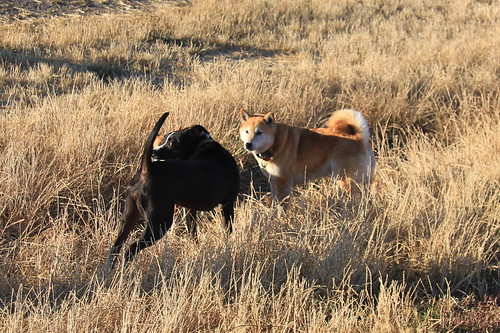 Well, I think Bowpi has figured out Bowdu’s habits, just as he’s learned to relax a bit when she wants to play chase. And they have learned to cover for each other, developing something that might be called effective teamwork.

When Bowpi started to have enough, I could see her breaking away, but this prompted the pit bull to start chasing instead. When she caught up, she’d try to roughhouse again, throwing all her weight into a galloping headbutt. Bowpi wasn’t having that anymore, so she led her straight towards Bowdu, who jumped right in to intercept the pit bull. After a few moments of all sorts of communicative microsignals that I couldn’t fully observe from my angle, Bowpi was able to slink away without being tailed again. 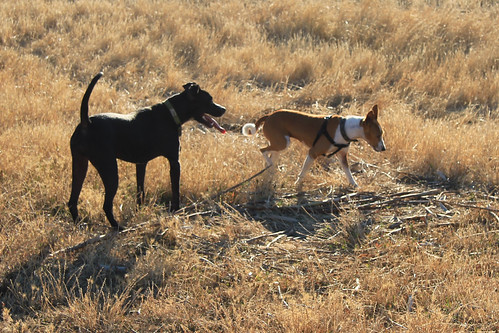 It was some good playing, and a good finale.

Maggie, a leggy, athletically built Golden Retriever, is quite an attractive dog in motion.

She had a hard time convincing her to just drop the ball and play chase!

While watching them, I was surprised that Bowpi was actually air snapping around the Goldie’s face at several points. I frequently see her do this at the flanks of running dogs, but seldom around their heads.

Luckily, Bowpi chooses her playmates wisely, as this Goldie knew how to read her cues. I think a well-socialized dog would understand that as a clear invitation to play, though some could find it annoying.

Bowpi was doing her best to engage Maggie, but she wasn’t holding back during the chase either. Maggie seemed to lose interest pretty quickly. At least the orange ball flies in a straight line, a much more reasonable pursuit than an erratic, zig-zagging Basenji.

Bowpi seems to play best with the fluffy toy breed types that are approximately her size. They tend to have just enough zing to keep up, but aren’t large enough to completely overwhelm her.

Well, some of those puppies can still propel themselves with quite a bit of force!

This is an amusing passage from Alan Beck, The Ecology of Stray Dogs: A Study of Free-Ranging Urban Animals (West Lafayette: NotaBell/Purdue University Press, 2002), a monograph about his field research in Baltimore in the early 1970s:

I was present at a meeting of “Children Before Dogs,” a group of citizens organized by consumer advocate Fran Lee, when the police had to be called in to end the fighting between pet owners and others in the audience. It was sad to see people yelling, fighting, and at one point even throwing dog feces at each other. Dog feces were blamed for killing both the “Maxie” style skirts and children. (54)

no, I’m not going to actually post a picture of feces being flung!

Obnoxious poop machines indeed, infringing on human sartorial freedoms! Sadly, the fight for dog-friendly spaces has long been a steady campaign to mitigate the offenses of the few.

One of the sheer pleasures of watching Bowpi run…

… is the way she turns corners.

These pictures don’t do justice to the action, but considering that they were taken in succession at 1/3200 second on burst mode, I guess you get some hint.

Not sure how she’d pull it off if she was after a mechanical lure or hurdling over obstacles.

She seems more inspired to bust out her fancy maneuvers when there’s a live companion and she’s in the lead!

Goodwill and conciliatory ‘copter butts to all.

Non-dog life is crushing me lately, and will continue its abuse through next month. I’ve not had much time to finish any significant blog drafts (a bunch of unfinished entries are accumulating in the queue). However, the Bows still need their daily outings, and I nearly always have a camera on hand, so I have plenty of images to get us through the upcoming weeks…

It’s true because Japanese scientists from Hiroshima University said so!

The young’ns definitely pique Bowdu’s interest. He’s surprisingly good with awkward, wriggly, and stumbly puppies, especially when they’re five months or younger. He’ll gruff in their face if they try to lick his muzzle or wrestle, but he lets them get away with it, and sometimes he’ll even return to engage them.

Giant breed puppies confuse him, though. By nature, Bowdu recognizes this Pyrenees is still learning the ways of the world, but his dignity must contend with the fact that a four-month-old puppy is already so much larger than him.

Bowpi would just rather they get coordinated enough to play chase instead of chew.

When I look at all my accumulated pictures of Bowpi playing with other dogs, I forget that it took her about six months of living with us before we saw her trying to initiate play. It was a few months beyond that for her to begin playing with Bowdu, even if somewhat awkwardly. Though she remains uncertain of how to interact with Bowdu, Bowpi has taken to wedging herself into the action, especially during Bowdu and RJ’s noisier roughhousing sessions. She’ll get between the two and try to “box” one of them, then flatten her ears and lick her lips like she’s anxious about what she got herself into. Then she doesn’t continue in earnest even when Bowdu responds by chomping her head and buttchecking her.

I wonder if living with Bowdu influences how she sees other Shibas, as a whole. We do encounter other Shibas fairly regularly — but no, I don’t see any consistency to her responses.

Sometimes Bowpi plays with other Shibas…

And sometimes she doesn’t.

How well they get along really depends on individual personalities, not breed. Generally, Bowpi is easy-going and able to adapt to virtually any other dog. Yet, the one breed that she reacts most strongly to is still her own.

We recently bumped into Zorro (above), whom we’ve had a chance to meet a couple times before when he was a crazy pup. Normally, Bowpi is more tense during other B-to-B encounters, but she just cut loose around him. Actually, Bowpi always seems to get along nicely with this local breeder’s Basenjis (we’ve had the occasion to meet five of her dogs now, including Zorro’s brother). It’s striking to me that a good breeder really can produce such consistency in temperament and type.

It’s nice to see her looking so comfortable around other B’s! Gives me hope for adding another to the household during her lifetime…