The Blaisdell family is bestowed a small fortune of $100,000 by a mysterious benefactor who has disguised himself as a boarder in their home. This is all part of a wacky plot by millionaire Samuel Fulton to test the mettle of the family to whom he intends to bequeath his fortune. Unfortunately, the money seems to change this formerly humble family for the worse. Mrs. Blaisdell gets the notion that wealth means superiority, and so all traces of their past life, including their “purebred mongrel” Penny, needs to be discarded. 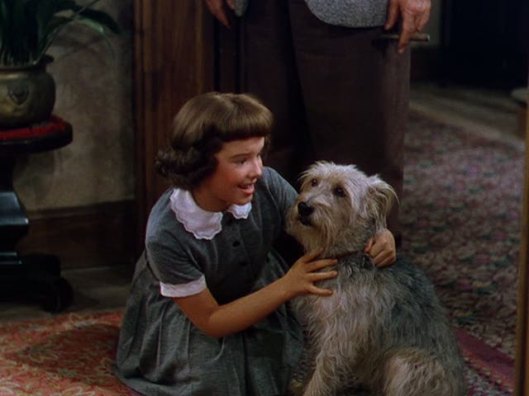 They do get the canine upgrade — two staid, boring-looking standard poodles named Mimi and Fifi. Luckily, Penny the mutt manages to find a home with the mysterious boarder, who is now renting elsewhere as he continues to observe the Blaisdell family. This allows Roberta, the youngest daughter, to continue visiting her beloved pet as she maintains her friendship with the eccentric old man who started this all.

It’s a pretty straightforward use of dog as class symbol and domestic value. Is your social worth measured by the unruly, unkempt, unrestrained mongrel or the high-priced, high maintenance purebred dogs you keep in your home? In the end, however, the dogs are more attached to a lifestyle than the family, since the new poodles are left behind when the Blaisdell family fortunes change again. And though we presume that they get Penny back just as everything else returns to normal, we’re never actually shown what happens to any of the dogs… In short, they weren’t important enough characters to be included in the film’s resolution.

Maybe the film should’ve been titled Has Anybody Seen My dog?

In Just Around the Corner, Shirley Temple assists the maintenance crew at a posh Manhattan apartment where the children’s playroom consists of a grand piano, ping-pong, and card tables, and the basement garage level houses a doggy grooming and boarding center. Clients include a rowdy pair of Afghan Hounds, Borzoi, Pekingese, Bedlington Terrier, and a toy poodle that walks on its front paws.

The DVD version I saw has options to watch in black and white or in a colorized restoration, which I thought was nicely done for the most part. Some of the yellows, golds, and fawn colors look off to me, but somehow I associate these softened hues with yesteryear, so it was all appropriate to my eyes. 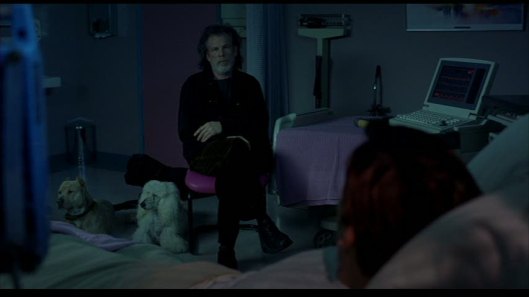 I have the greatest respect for Ang Lee, and usually find him a versatile director who does a careful, nuanced job of giving emotional and psychological depth to a great range of characters. That said, Hulk was a stinker on a number of levels and is the weakest title in his entire filmography (take it from someone who’s seen them all). This animated dogfight scene that happens about halfway through was the signpost announcing that the film had just fallen deep into the Valley of Suck — abandon hope all ye who enter. 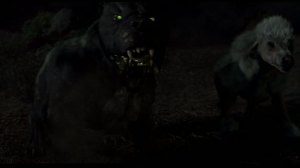 Bruce Banner’s father to Bruce Banner’s girlfriend: And don’t worry about the dogs. You’ll be fine. Just don’t look them in the eyes.

Nick Nolte plays Bruce Banner’s father who makes his grand entrance with his three random dogs. They lay at his side with no interaction whatsoever. The dogs’ attention is clearly on some off-screen handler (see top screenshot). It appears that the Nolte character doesn’t even like his dogs that much, so there’s no love lost when he Hulkifies them and sends them on a mission to dispatch Bruce Banner’s girlfriend. And of course, that makes Hulk mad, so an all-out battle ensues.

It’s a pretty violent sequence, though there’s really not much blood and gore. The dogs get pummeled to pieces or torn apart by the Hulk, dying in a spray of green pixels, and that’s that. It seems to me that this was about the time that Hollywood started projecting more graphic images of violence unto animals (Peter Jackson’s King Kong from 2005 also comes to mind), which became permissible under the idea that no real animals are harmed, and more gruesome images of human violence are commonplace in films equally rated (Hulk has an MPAA rating of PG-13). Anyway, the action choreography here is tight, I just find the overall visual design to be lacking.

Seriously — a black dog and a dark brown dog battling it out at night in a redwood forest? Did they keep everything dark and inscrutable in a desperate attempt to mask how shoddy it looks? The Hulk looks like he’s being hugged by a couple giant gophers at some points. The poodle ends up appearing the most vicious of the trio, only because its form and face can actually be distinguished.

Anyway, the segment serves only to provide banal action-filler that’s a far cry from the martial artistry and visual splendor of, say, Crouching Tiger, Hidden Dragon. Ang Lee could’ve done better — perhaps by leaving this scene out entirely, for starters.