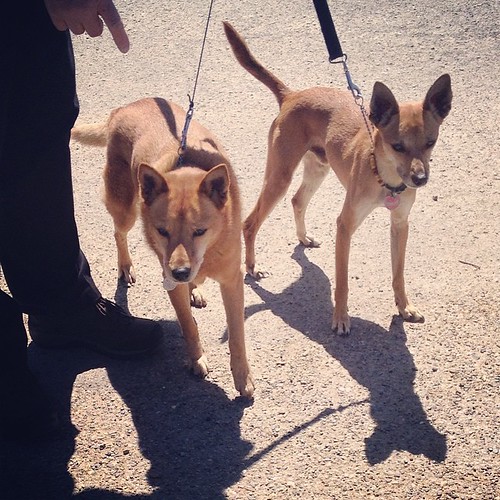 This guy is funny. He jokes that he has fake bootlegged versions of the Bows, a Shiba mix and Basenji mix. Not sure how much Basenji I see in the leggy guy on the right. Regardless, both are genuinely cool dogs.

Disregarding the fact that they don’t look that much alike, this was strange logic to me…

“Basenjis are everywhere. There’s a little Basenji in everything. They’re little horndogs.”

This person was, I think, extrapolating from the “primitive” status of Basenjis to the perceived ubiquity of Basenji mixes. An amusing perspective (regardless of accuracy) that goes against the decline in purebred Basenjis over the years…

“What beautiful fur he [Bowdu] has! He would make a great pair of gloves!”

Most shocking to me was the nonchalance with which this sweet, old woman made this statement as she stroked his back and made kissyfaces at him.

Person A: “That’s a Basenji. They can’t bark.”
Person B: “They can’t? Really? Why not?”
Person A: “They were breeding their necks in such a way that they got their voicebox squeezed out of them.”

Oh really. Tell me more about how they bred Basenjis, please.

“Did you have to break their tails to get them to curl like that?”

Sure, I confess to some fetishization of canine curly tails, but I’m not sadistic enough to take it to the level of Chinese bound feet…

“Shiba Inu are a bit like the Japanese. Charming, incredibly polite most of the time, but prone to sudden outbursts of violence.”

… as spoken (with great fondness, believe it or not) by a middle-aged Taiwanese woman who was probably channeling her own nationalistic education in colonial history.

(The Shiba depicted with Bowpi above is not Bowdu, and despite appearances, they are just playing!)

Gah. I just wanted all three of them facing the same direction. But this is sufficient for comparative purposes, I think. Taiwanese tugou/Formosan [mountain] dogs are frequently listed as “Basenji” mixes when they make their way Stateside. While this goes some way in generalizing for temperament, I think it does a disservice to both the Basenji and the tugou to mislabel them in this manner.

When I am able to identify a large enough population of Basenjis in Taiwan (my current count: 0) to account for the disproportionate number of “Basenji mixes” from Taiwan that end up in rescue, I’ll let you know. Until then, I’d rather let the tugou be a tugou… complete unto its own terms.

UPDATE 17 NOVEMBER 2012: Yachtz still needs a home! He now has a listing on Petfinder with Homeless Animals Response Program in Antioch, CA. Please check out the link and contact karen.kops@harp-rescue.org for more information.

The other day, I visited this Basenji mix and took some pictures.

His name is Yachtz (I called him Yacht-zee, like the game). He is 12 years old, healthy, neutered, up to date on all his vaccinations. Sturdy. Tipping the scales at 40 ~ 50 pounds. Gets his business out of the way before he comes to check you out. Companionable, once he knows you’re a friend. His broad face lights up with a cheesy, goofy grin.

This is what we know from previous BRAT postings:

“His owner has fallen on very hard luck finding herself homeless after hospitalization and is devastated that her longtime companion now has no one to provide for him and keep him safe as he lives out his life. The local ASPC graciously stepped up and paid part of the kennel fees but that was quite some time ago and he continues to be graciously kenneled with no hope of payment. The kennel owners understand that they will never be able to recover their costs and have been absolutely great in this situation, they do not want to see Yacthz euthanized, they say he is still a vibrant and healthy mix. He is bigger than the average Basenji but has the Basenji yodel and coloring. There are many volunteers that are willing to work to get him transported but we have been unable to find a rescue or adopter to transport him to. Understandably though, he needs to be out of the kennels!

“According to his longtime owner, Yachtz gets nervous and sounds aggressive around bicycle riders, skaters of both skate board and any type of roller skates. He is also sensitive to motorcycles. He was like this when adopted in 2003 and have no idea what may have happened to him in his early years. Yachtz also has a tendency to be food aggressive with other dogs. Although he makes grumpy noises he does not have a bite history but may do better living out his senior years as an only dog or with an owner experienced enough to deal with these characteristics effectively.”

I wasn’t able (or qualified, really) to test him with other dogs and fast-moving objects on wheels, so we’ll just have to take the previous owner’s cautions for what they are. I did note the irony that he shares a name with a manufacturer of longboards… but anyway, his issues are minor relative to the bulk of his potential. He’s quite limber, not hyper, and not slow; I wouldn’t have correctly guessed his age on my own. Didn’t seem particularly interested in toys or balls, but when I showed him a leash, he started whimpering with excitement.

I was pleased to find that he didn’t really pull or jerk me around (which is easy to do, given my size). Though he wanted to take the lead, he was quite responsive to my verbal cues and changes in direction. We weren’t able to go further than the perimeter of the play area. Mostly, what he wanted to do was explore and mark things.

He has some basic training vocabulary — sit, shake, and down (though it was too awkward for me to catch the last bit while holding a camera in one hand and training treats in the other). Though he didn’t seem particularly food motivated at first, he became interested once he warmed up to my presence. I guess he decided I was all right after a few scritches behind the ears, and especially after I Zoom Groomed the loose hair off his backside. He gave me his approval along with a chestful of wiggling dog butt.

Grateful for the compassion of this family-run kennel that has been housing him for over five months, I dropped off a 15 pound bag of food during my visit. But what Yachtz really needs is a proper home to live out his retirement years! Please share with any interested parties, especially if they’re anywhere near Martinez, Northern California (there are ways to make transports happen), and let’s see if we can get him home soon.

For more information about how to adopt this boy, you can contact Ray Eckart with Basenji Rescue and Transport or drop me a message to reroute thataway.

Sunny’s momma was a known entity. The father was not. But maybe not so hard to guess on this one?

Bonus huddle for a top-view of his forehead crinkles and a size comparison:

Little Jack here is the coolest dog around during football season.

I couldn’t help but notice his distinctive coloring, coat pattern, and that wisp of a curly tail. He is quite short, with a very wide stance. I asked his owner if he knew him to have any Basenji in his background, but since Jack was found as a stray, it’s anybody’s guess. So my guess is that he’s a Basenji-Dachshund mix. Or maybe something achondroplastic plus a red Italian greyhound, given his highly animated flip-ears (though the deep red Iggies seem even rarer than Basenjis around these parts).

I only got a few clear shots because he was pressed up way too close for me to get a proper portrait! Whatever he was, he was cute, and he had super soft, glossy fur that I was happy to keep petting.

December’s monthly Basenji meetup came early, since the last Sunday of the month is Christmas Day. Some B’s were more than ready to celebrate!

Let’s see if I got this right: from left to right, Dannii, Scout, Zak, and Jenna.

And the one below, from left to right: Dannii, Jenna, Baree, Zak — four tongues to the wind in anticipation of handouts.

And his recently adopted sis Roxy, sporting some new accessories:

This cute pup named Beta paraded through the crowd at one point. Looked a lot like a Taiwan tugou to me!

Everyone insisted that he is a brindle Basenji mix. I’m not entirely convinced, but it’s certainly high on the list of possibilities!

Beta would have been the youngest, if we count him as an unofficial attendee. The eldest, I think, is Sunshine. On this overcast day, she was a bit shivery in the absence of her namesake.

By the end of the meetup, I came to a couple realizations regarding the Two Bows. The first, about Bowpi — even though she typically loves her time at the park, and even though she has played with other B’s before, she’s become increasingly antisocial at these meetups.

Maybe this is because she’s been jumped by too many Basenji gangs, or she just prefers to stay out of crowds. At any rate, it’s evident from her body language that she’s not as into the meetups as everybody else, and no amount of treats can convince her to enjoy herself.

Still, I did manage to get a shot of her alongside Dannii of the Troublemakers pack. What a dainty leg-lift!

In sharp contrast to Bowpi, he’s too into the idea of jostling amongst the horde and competing for treats. There’s usually a lot of teeth-flashing from him, directed at his neighboring dogs. His line of vision in the picture below remains fixed on the human, but make no mistake — he’s simultaneously communicating with the dogs at his side using a very different type of language!

That day at the meetup, he was really having a hard time keeping himself contained, and he crossed the line with a couple spats. Bowdu was also recently on the punishED end of a minor incident that was serious enough to result in an exchange of personal information (but no vet visit). I don’t know if that memory contributed to his bad behavior this time, though this was a different park and crowd altogether. Whether or not he’s the instigator, obviously I’d like to minimize such scuffles.

I don’t want to set him up to fail again, so I think we’ll cool it with the meetups for a while. Frankly, there are too many variables outside of my control. As much as I love taking pictures and seeing so many Basenjis at once, Bowpi gets overwhelmed, and Bowdu is too easily pushed over threshold in the presence of food.

I know that he’s not a bad dog, but lately, he has not been doing his breed any favors!

I look at a lot of pictures of Basenji and Shiba mixes, but on the rare occasion where a Shiba-Basenji mix has been presented, I’ve been skeptical and unable to confirm because the identity of the parents wasn’t known. Mo knows though, and presents these pictures of the mom (cream shiba) and dad (black and white basenji) as proof:

Mo reports that Mambo at the adult age of 3 and a half years old has filled out to 28 pounds, bigger than both his parents, and has a friendly, playful, and mostly obedient temperament.

Sounds like they got lucky, because that combination had the potential to turn into a super punk. We kid, of course.

Thanks for sharing, Mo!