The Associated Press picked up an evocative story about a photographer of Taiwan shelter animals, Tou Yun-fei 杜韻飛 (real name Tou Chih-kang 杜志剛). Tou’s basic mission is to photograph austere, noble portraits of shelter dogs that force a confrontation between their animality and the viewer’s humanity, moments before he or she is taken away to be killed. Since last week, the story has been getting a lot of traction on major news sites, from ABC to the Daily Mail to Yahoo News to Huffpo to Dogster. If you haven’t read the story yet, go ahead and click on any of those links… they’re mostly the same content from AP writer Tassanee Vejpongsa.

Tou is working on a better online collection of his photos, but for now, he has a small gallery here. 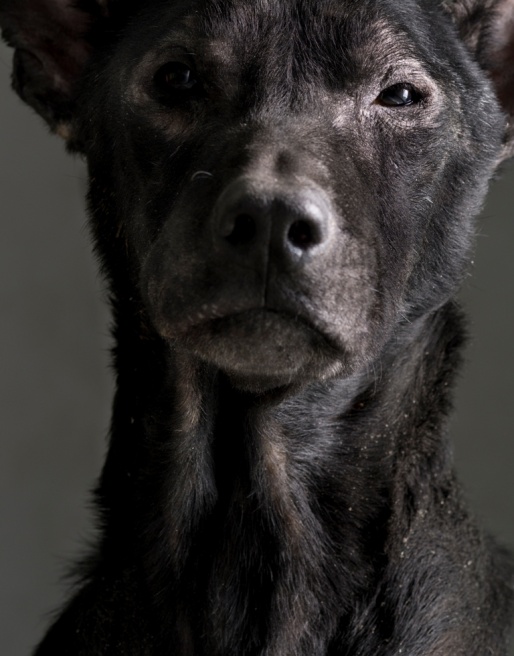 Starkly composed and tightly framed, each portrait leaves you with no other option but to look back into the eyes of the already dead. The photos shared are not gory or grisly. They are haunting, pathetic, dignified, somber… necessary. I am glad to see Tou’s work getting such wide exposure from international media outlets, though the accompanying article itself is pithy with history and context, leaving many questions and open-ended generalizations.

Oddly enough, many well-meaning internet wanderers have found their way to the House of Two Bows, apparently attracted to a few stray articles I have written about Taiwan animal rescues. Instead of answering every e-mail individually, I thought I’d try to contribute a more streamlined response via blog.

I am an American who is just learning about the animal crisis in Taiwan from Tou Yun-fei’s photojournalism. Although animal abuse and maltreatment is a problem globally, it seems as if the issue in Taiwan is more than a problem. From my reading, I am learning that part of the issue is that many practicing Buddhists believe that dogs are humans with negative karma reborn… is that true? Does Taiwan have spay/neuter clinics for animals or is that part of the problem? Overpopulation?

Additionally, my most important question is how can I (someone so far away) help build awareness and education of the issues facing animals (predominantly dogs) in Taiwan? How I can help you?

Any information would be greatly appreciated.

I leave my hasty, poorly-researched response here. Keep in mind that I write NOT as an expert, not truly an “insider,” and currently geographically distanced by an entire ocean from the island.

But I know the problem is multifaceted, systematic, leviathan as it is here in the US. It’s impossible to reduce the problem to religion. I’m not even convinced this explains the magnitude of the issue (though I’ve heard similar analyses from Taiwanese people), though it might contribute significantly to solutions. Buddhist non-interference is one of an array of responses which could include Buddhist activism, as well. There’s certainly an argument to be made that you can’t stare suffering in the face and not act if it is in your power to do so, since we are, after all, blind to how our own karmic scales will tip at journey’s end. Anyway, not everyone in Taiwan is a practicing Buddhist. This is to say very little of how Taiwanese Buddhism is a syncretic amalgamation of Taoist and Neo-Confucian influences as well, and there are many Christians, other religions, and non-religious citizens on the island too… but that’s getting a bit off topic.

Local temples get a lot of traffic. Not everyone who passes through is there to pray or to worship. In more rural areas, stray dogs are more likely to congregate, as monks and temple keepers provide leftovers for them.

Though there are many spay-neuter options, I still found quite a bit of reluctance from pet owners to desex their pets. When Bowdu was neutered at six months, even our vet commented that it was a “pity” to neuter a purebred because we would miss the opportunity to breed “valuable” puppies. This sentiment would be repeated by numerous strangers and familiars. Perhaps pet owners found it illogical to spend money to deny oneself an opportunity to make money, and the greater social benefits of spaying and neutering had not yet caught up to the rise of pet owner conceit.

Cost and convenience was really not much of an excuse. The regular price we paid for neutering was about $60 US dollars, and we were literally in and out of the clinic in an hour. Furthermore, the Taipei county government reimbursed vets about 1600NT for every spay/neuter they perform, in the hopes that this would encourage vets to perform more spays and neuters, as well as extend discounts to rescue, animal welfare organizations, and other well-meaning citizens (not sure if they still do this — will need to follow up). My family in central, more rural Taiwan was either more progressive in that they willingly spayed all their tugou, or perhaps just more practical about the matter since Grandpa, at least, still permitted his bitch to roam, like in the old days.

Yet, I think the vast majority of pets in Taiwan remain unspayed and unneutered, though I don’t doubt that this is changing — I don’t have the statistics right now though. There are also more mobile rescue groups who will catch, neuter, and release packs of stray dogs (more common in non-urban areas) and sponsor spay/neuter campaigns. The abundant pet stores and individual breeders, however, do nothing to educate on appropriate spaying and neutering (and they really could take the initiative on advocacy, by raising the standards amongst breeders — whom we’re not opposed to), let alone the government shelters. A lot of city shelter “services” are outsourced with the goal of eliminating immediate problems (mass round-ups and extermination) instead of long-term welfare.

Overly familiar with the sordid practices of government bureaucracy, a lot of people refuse to bring stray or unwanted dogs directly to the slaughterhouse, as it were. Leaving dogs to fend for themselves on the street seems like a more humane option to those who can’t feed or take them in. Strangely enough, I can understand that perspective. What I (and more and more Taiwanese people) can’t condone is the choice made by those who buy puppies when they are little and cute, grow tired of the commitment, then release and abandon their pet thinking it a “kinder” fate than a shelter death. And of course, their dog is most likely not spayed or neutered… and so they mate with other street dogs, more dogs are born… and the problem regenerates.

Somewhere in the Eighteen Levels of Hell, there must be a special place of punishment for those who abandon their dogs without trying AT ALL to properly rehome the animal through a trusted friend or responsible rescue. Maybe instead of being sawed in half, like this adulterer, night after night they are torn apart by Poochie and her progeny?

There’s a lot more going on, of course, but this is what I thought to fill in “behind the pictures,” for the time being. Meanwhile, you ask how you can help?

If you live in or near San Francisco, Los Angeles, Seattle, Vancouver, or Toronto, it’s very likely that you have a rescue organization near you that works directly with animal welfare groups in Taiwan, as these are the major North American destinations accessible by China Airlines and EVA Airlines, Taiwan’s two main commercial air carriers. Volunteer passengers typically get the dogs out of Taiwan by “sponsoring” flights for the animals, since it is prohibitively expensive for them to be shipped alone as cargo. The volunteers get no compensation other than the satisfaction of escorting great dogs to a better life and better chances of adoption on this side of the Pacific.

If you’re in the San Francisco Bay Area, I know these rescue groups work with Taiwan animal welfare organizations:

If readers are aware of any that I have missed, please let me know so I can update appropriately.

Here are other rescues in North America that network with Taiwan groups (not a full list):

And of course, there can only be progress with the efforts of those working in Taiwan itself. Here is a list of some groups that I know of — you can research each organization, reach out, and donate if you are so motivated. Be forewarned that the Taiwanese are not reticent about exhibiting more graphic pictures of sick, deformed, mutilated, and abused animals:

Finally, I acknowledge there is controversy over how much foreigners should invest in other countries’ humanitarian efforts when we already have plenty to deal with on home turf. I’ve briefly addressed this in previous posts, and don’t have much to add at this point. My life is lived in multiple Heres and Theres, so my considerations perpetually flit between. But this mobility and transnational traffic of physical bodies isn’t uncommon now. Perhaps the same will eventually be said for concepts like compassion, respect and responsibility towards animals. If not your dollars, your attention, or your adoptions, create a world that fosters and rewards empathy, from wherever you might make yourself at home. I think that’s the best I can really suggest for anyone who wants to know how they can help there from here.