While dogs have appeared as pivotal characters in zombie films (most notably in our knowledge is Chips in the remake of Dawn of the Dead), we had never heard of a zombie film that assumed the dog’s perspective — until this short film. We were really excited to receive our DVD copy of Play Dead just in time for Halloween. If you’ve ever wondered what would happen to urban pets in the event of a zombie apocalypse, this film might not whet your appetite, but it should stir your imagination. More frightening than zombies who eat humans are what humans are willing to eat in times of survival… 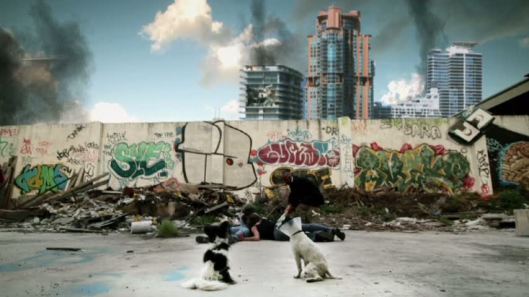 Thumbs up to the directors for their adept manipulation of genre conventions, combining zombie films and dog movies in entertaining, often hilarious ways. Miami appears in all its lurid glory, represented by a diversity of people and pets. The production company apparently gives back to the city by hosting a film festival that highlights regional talent.

You can experience the whole film online. Warning: mild but vivid gore as befits the genre.

Enjoy, and make sure to watch through the end credits!

GOD is just DOG backwards, as the aphorism goes. To skew this equation a bit, director Singing Chen inserts man — and they certainly do outweigh both dogs and gods in this film.

First, we are introduced to a young career couple with a new baby. Mother is a hand model, and father is an architect. Together, they represent a typical upscale, urban family ensconced in material comfort but completely lacking in emotional resources. They are as warm to each other as they are to the free-roaming dogs camped out at the base of their high rise apartment.

Next, we have an indigenous family living somewhere in the outskirts of Taipei. Father is a recovering alcoholic, and mother does her best to keep him under surveillance of the church. Their teenaged daughter, Savi, is begrudgingly training in Taipei for the boxing career that will be her ticket out of her parents’ economic rut. Savi’s anger at her father’s frailties blinds her to the extent that she is enabling her girlfriend’s vices, as the two embark on a mini crime spree, ripping off would-be pedophilic sexual predators (one could call them “lustful wolves”, se lang 色狼 in Mandarin Chinese). 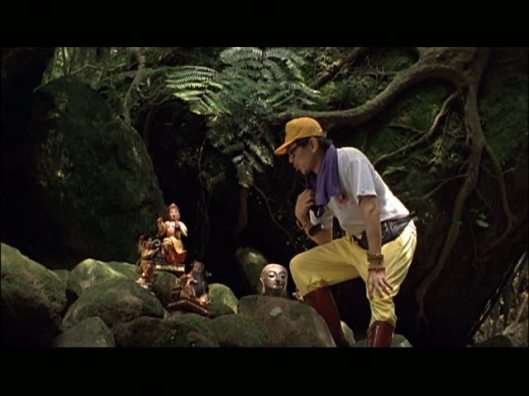 Yellow Bull is an amputee truck driver who runs shipments up and down the island, collecting, repairing, and “rehoming” abandoned idols from Taiwan’s diverse and syncretic pantheon of local gods (with room for the Virgin Mary). For all his good deeds, including looking out for packs of stray dogs along his route, he cannot purchase a new prosthetic leg with merit alone, so he has to work hard to earn money before his old limb completely wears out.

Finally, there’s Ah Xian (whose name 仙 references Daoist mystics and immortals), a teenage wanderer with a voracious appetite and metabolism to match. He bums around the island winning prizes in eating contests and scheming what he can.

Each character runs their own course, scarcely involved in the others’ affairs, and this makes for confusing narration at times. But the complexity of the cast is a feint. Truth is, their names (and relative lack of star personas) don’t actually matter. Back stories are irrelevant, as well. You’re not supposed to connect with the characters because of where they’ve been, but what they do in the presence of fellow gods, men, and dogs.

By the time we realize the characters’ lives have become entangled, it’s too late to let off the accelerator, causing a huge traffic accident that narrowly misses taking the life of a stray dog. And that’s exactly what happens at the climax of the film. In an instant, lives and fortunes are lost… including a “million dollar” pedigreed black Labrador Retriever, pregnant with an entire litter of champion-bred puppies, who survives the crash and escapes from her owners’ overturned vehicle. 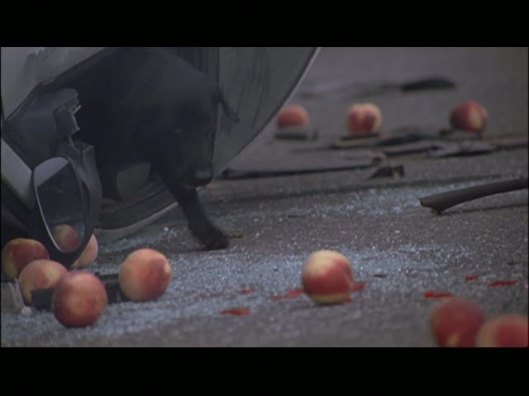 Identities are porous and as fragile as a baby’s breath, too. One can be a collector of antique religious iconography one day, a monotheistic Christian the next — Atayal when conscious and sober, or tossed in with Thai laborers in the overnight drunk tank. Even the expensive purebred Lab becomes indistinguishable from the other street dogs, and within a couple generations, her puppies will be, as well. As the characters’ lives and identities morph, bend, and break, we are repeatedly reminded that sometimes, our futures are beyond our control, no matter what god we beseech for mercy.

Though each character is persistently emptied of identity and agency, the story seems to gesture not towards nihilism, but to some external, transcendent reference. Nevertheless, I can’t reduce this quirky and philosophical film to mere allegory; it’s an ambiguous parable at best. We are shown plenty of the moral vicissitudes of mortal life, and it’s hard to draw any clear message. It’s not that type of lesson, not that manner of film. Of Gods and dogs, both remain distant, obscure, and inexplicable.

I suppose I was most drawn to Yellow Bull’s character (played by veteran actor Jack Kao) since he was the kindest and most fleshed out character, fully occupying his central position by communing with both dogs and gods — all living entities to his mind who literally cry out for help when abandoned or lost. Yet, he treats both gods and dogs with the same casual respect, without claiming ownership. He feeds the strays that have come to anticipate him, but they don’t enter his home. In such a way, the dogs maintain their status as borderline beings, just at the threshold of domesticity. Symptomatic of how none of the characters owns up to their responsibilities to their family members, no significant character actually owns a dog in this film.

It’s a reminder that there is another realm of animal belonging. In contrast to how I typically think of dogs as residing within domestic life, the story preserves the status of dogs as animals that are, after all, separate from man, but lurking somewhere at the edges of human wonder and imagination — like the gods. 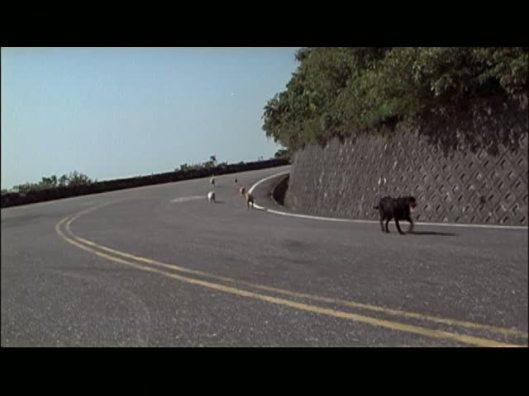