I dreaded the accounting on this one, but delaying it doesn’t make the expense go away. Bowdu’s last vet checkup was a heavy one, financial and psychological. 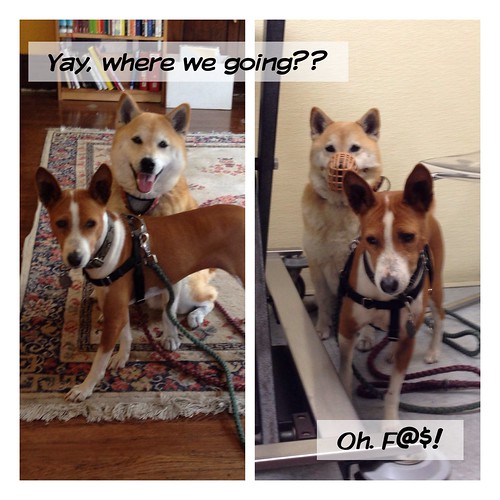 For Bowdu’s annual exam, I had an additional concern. Bowdu’s back legs — his back right leg, in particular — had been shaky for quite some time now. Last year, the vet said it indicative of muscle weakness, a symptom that often accompanies hypothyroidism. Bowdu’s energy levels remain consistent, so we maintained observational hover pattern.

Unfortunately, in the last couple months, his hind leg seems to have been giving him more trouble. The shaking, which was fairly sporadic in the past, is fairly constant now. One day a couple months ago, he started walking with a limp and keeping that back right foot raised. This wasn’t set off by any memorable trauma, and our routine has been fairly steady and low-impact, all around. He wasn’t expressing any audible pain, so I kept watch and waited it out. He returned to normal stride after a few days.

A few weeks ago, the same thing happened again. This time, however, he wasn’t so quick to bounce back. He is clearly not jumping as high as he used to. Getting up on the bed is a two-step process now, using his dog bed (placed on a cushion at the foot of the bed) to trampoline himself up to the human bed. He even allows me to lift him into the car — something that he usually makes an undignified stink about. On our off leash walks, he boycotts certain regular routes that we’ve hiked for years, and won’t follow closely. This is unusual, even for his Shibaness.

(Apologies for the vertical videography)

The second video, in particular, is Bowdu at his creakiest and slowest. [**Significant ETA: I just realized the second video is from the same day of his vet exam, which means his slow motion is actually a residual effect of the Acepromazine. The pace helps to show his funny gait though.] He is not a young dog anymore, but at nine years old, this is not what I would expect either. So we went off to the vet for as full a workup as we could manage without sedation (other than his acepromazine) … 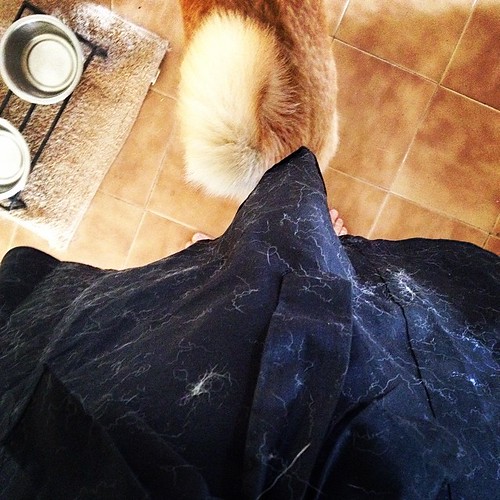 So much for his winning streak as a “good” patient. Bowdu was not having it this time. Suffice to say, I’m now looking forward to another estimated $500 examination, which will include sedation and X-rays, to get Bowdu’s back end issues properly diagnosed.

Based on Bowdu’s history and what I know of other Shibas with similar health profiles, I strongly suspect it’s an ACL injury. I don’t want to say much more without an official diagnosis. In the meantime, he’s been getting loaded up on liquid glucosamine

supplements (which I’d stopped for a while, and more on that some other day) and he continues to get daily fish oil capsules. His weight is good, so there’s no change to his diet. We continue our regular walks, including our off leash hikes along less strenuous trails, which I think gives him the freedom to move at his own pace and comfort.

I have to trust that he knows his own body as intimately as nature allows. He won’t tax or purposely hurt himself. It’s only been a couple weeks since his visit and about 10 days since I started loading him with glucosamine, but he’s been noticeably improved. His situation is far from dire, but it will need to be addressed.

And this, too, is when I feel the pressure of maintaining an aging dog on a student’s budget. Even if his situation is “just” remedied with steady glucosamine supplements, I think I’m looking at about an additional $200 a year on nutraceutical expenses — which I’m ready and able to do. What I do now will have an impact on Bowdu long beyond my current budget situation.

The vet also mentioned an injectible solution called Ichon which is more expensive, but reportedly, more effective. Absorption is one of the biggest variables across tablet, liquid, and now injectible forms of glucosamine, so I’m going to have to do some research to figure out a solution that works best for us.

Getting ahead of ourselves though, especially since there hasn’t been an official diagnosis. Apparently, the supplements — and time, of course — are making a difference, so this is what’s in our future. Clearly, we’ve passed a life stage threshold of some sort. While Bowdu may not be as active as he was even a mere year ago, there’s a lot of life in him yet. Learning how to make the most of it is an ongoing, mutual process. 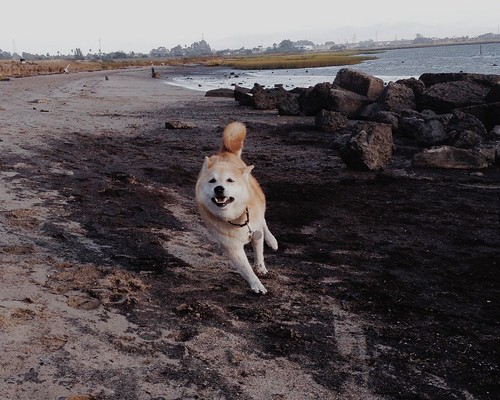