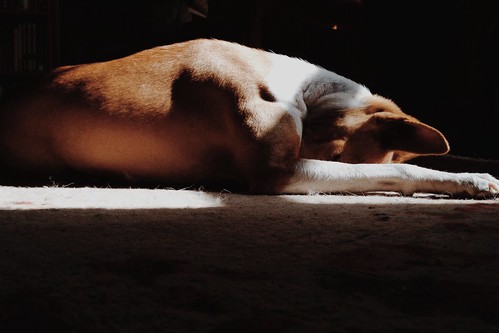 One of her favorite sleeping positions.

After all these years, I don’t think I can say that the Bows have bonded deeply to each other. But they do watch out for one another. As part of their membership in the inner circle, they’ve learned to give each other secret handshakes. 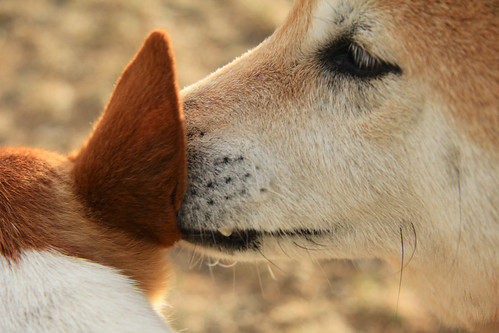 If they stray out of sight for a little longer than usual, the Bows will check in upon reunion. Sweet exchanges: a quick burrow into an ear, a brief nuzzle to the cheek. 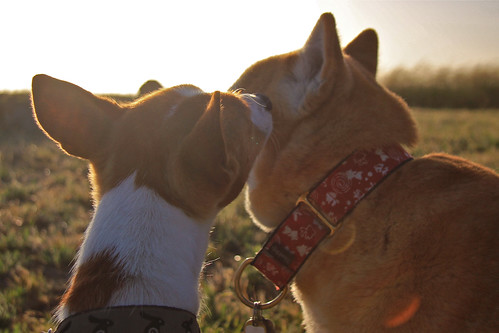 Bowpi readily gets up close and personal with strange dogs, while Bowdu only permits such gestures in the most familiar company. Bonded or not, I’m proud of how far the relationship between these two has come.

In a poverty-stricken corner of urban Taiwan, a small group of Taiwanese and Mainland emigres form a community built upon “love between mother and daughter, between compatriots, and of a small orphaned girl, and the moving fraternal love of the poor masses.” The group learns how to coexist, overcome differences, and triumph despite trauma in this uplifting, sentimental story. Saccharine as it may be, this film is exactly what resonated with audiences of the time, and moved director Lee Hsing to center stage in the emergent Mandarin-language film circles in the Republic of China on Taiwan.

This director is important, but I won’t go into the details here; you’ll have to ask me in another context as to how he became a household name. What’s important for the purposes of this blog is that he went so far as to include a very special dog in the film that would serve to launch his grand career.

The dog doesn’t really have a name. They just address him generically as “little dog” (xiaogou), though he is treated as a treasured member of the community. In particular, he is present at moments of stress and consternation — which, for poor people, unfortunately happen often.

The physical interaction between humans and dog is fairly subtle, but I think it’s significant. The dog appears at moments that both reflect and amplify the anxieties of the human characters. We have no idea of where he came from, what his own story is. Then again, we don’t know that much about the humans’ backgrounds, either. We do know that every character has a function and a role in this community, contributive or extractive. The little dog, apparently, contributes by extracting anxiety — as a docile, obedient therapy animal, of sorts.

The fact that he doesn’t clearly contribute to the community makes him vulnerable, after all. It’s not like they need him for hunting or ratting or anything other than comforting his people at home. When Pearl, his owner and one of the central characters in this story, is in need of money, the only thing she has of value to pawn off is the little dog. And so she does, barely aware of what kind of future she may be condemning her formerly beloved pet. She knows the dog is inherently “worth” something… she just doesn’t necessarily understand why.

The adult viewer at the time, however, understands the gravity and peril of the situation all too well. Frankly, Little Dog has a greater chance of being resold as meat than as pet or even a “working” dog. Pearl has left the dog’s fate entirely up to chance, just like the public lottery tickets (also for resale) she bought with the money she got from selling her dog. This is the order of life in 1960s Taiwan. But while Pearl’s customers can scratch and just be out a bit of cash when they lose, Little Dog is in danger of losing his very life. That’s what makes the scene so devastating, even if the consequences are removed by several steps.

Nevertheless, it’s entirely to director Lee and his scriptwriter’s credit that they made sure to tie up loose ends and explain that yes, the dog was safely recovered after all. Who cares about the unlikely circumstances of his return — a neighbor happened to run into the anonymous dog-buyer and buy back the dog (at who knows what cost). I’m glad that director felt that Little Dog was important enough to include a resolution, since he could easily have just dropped him from the storyline as so often happens to film dogs… Lee, however, had a sense that the dog would matter to audiences, as he must have mattered to him.

For every potential dogeater in the audience, there was at least one who would find such practices gruesome and abhorrent. Lee took sides with the latter.

I first saw this pre dogblog days. Recently revisited, I was impressed by how much one could get out of just focusing on the dog. So very interesting to see concern for the canine given equal status as the urban underclass, the female, the ethnic minority, and other vulnerable groups — even as early as 1963, in postwar Taiwan, where one might assume that so many other things would matter more. 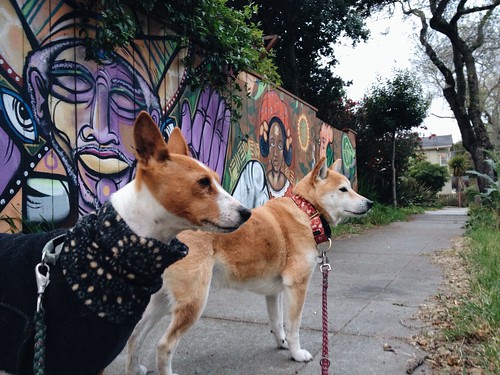 We don’t live in the best neighborhood.
In daylight, it’s really not so scary. 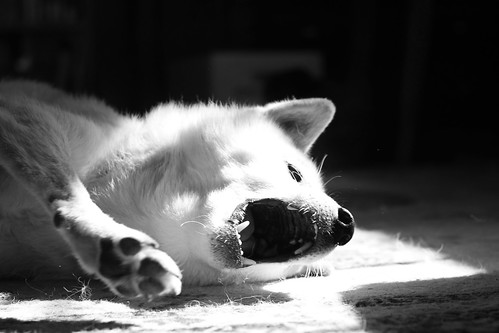 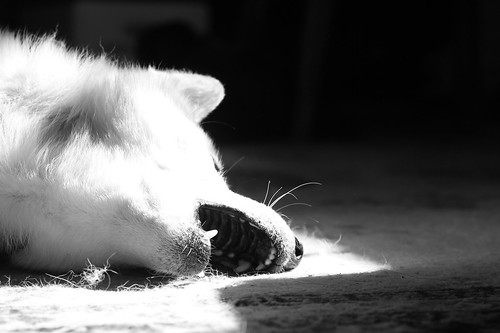 In these pictures, Bowdu looks like how I feel lately.

Lots of writ(h)ing happening off-blog at the moment. Until I vanquish these wordbeasts, things will be quiet. A picture post may surface on occasion. 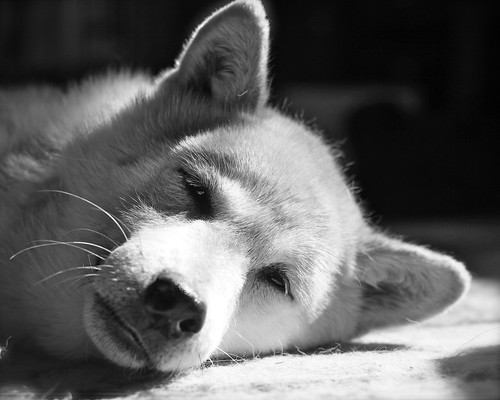 I finally snapped a picture that I like enough to place as a new blog header. When I first activated this WordPress theme [Chateau], I don’t think there was an option to randomize header photos. Now that I know there is such a function, this is one I’m throwing into the mix: 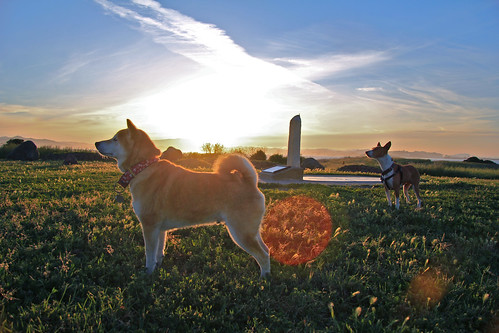 Confession: This shot was taken at one of our most frequented parks, in an area currently under contest. After years of trouble-free use, the commission in charge has decided to act on seemingly arbitrary grounds and declare this specific area a leashed zone.

This came as a surprise to the vast majority of canine-accompanied visitors who, like me, have always found it an off leash area.

After numerous meetings both public and private, new signage, vandalized signage, posted bulletins, letter writing campaigns, Facebook quibbling, and some of the typical sniping that accompanies dog-centric kerfluffles, consensus seems to be carry on in a respectful manner. The park has no power to enforce its own policies, let alone maintain the grounds in accordance with the original guidelines they laid out decades ago for the use of this off-leash area.

We at the House of Two Bows advocate healthy, safe, and responsible sharing of public grounds. This includes abiding by posted leash laws, learning to share with other patrons who are there to respect and enjoy the environment … 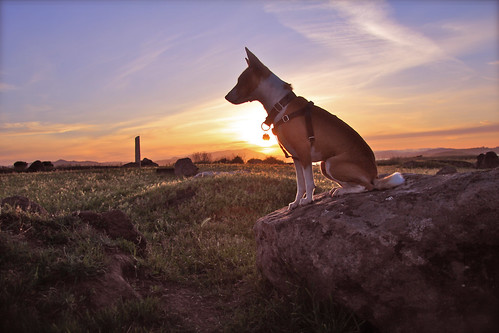 … and also recognizing that sometimes, the pathways formed by the habits of hundreds of thousands of human and canine footsteps really do make more sense than the rigid boundaries drawn by a few forgotten rulemakers. 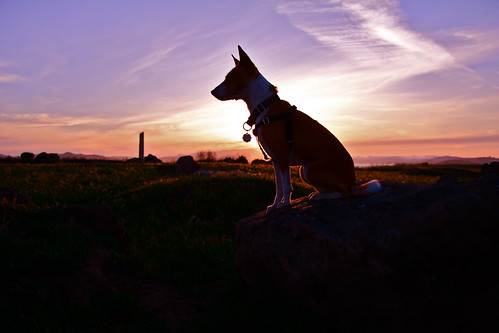 Such is the “natural” evolution of public, community space.

Well check that out. We rocked this month! This is the whole point of stocking up in previous months though, yeah?

Poultry organs are always cheap. The most expensive food item was this one pound chub of Mary’s Pet Food, purchased on a whim when I saw it at my local grocery store. There’s not a lot of online information about this particular product, which does claim to be a “complete” meal suitable for both dogs and cats (hmm…). I was even confused as to whether it was actually cooked, semi-cooked, or raw, as the label doesn’t even say; the meat was not pink, yet it was bloody and drippy after thawing. The website printed on the package doesn’t actually say anything about pet food, but it does tell about Pitman Family Farms, the parent company. Apparently they specialize in “less stressful” slaughtering techniques for poultry, using a process called Controlled Atmosphere Stunning. Interesting. 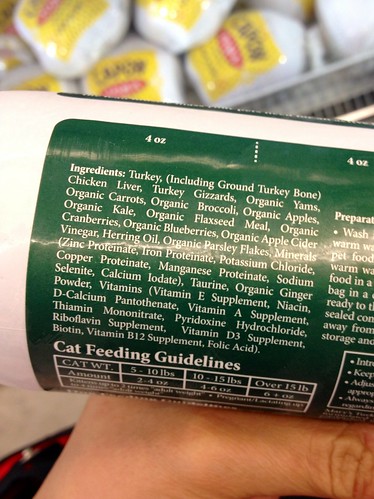 That sounds like a lot of technology to support for $7.99 + tax, which made me think it was a fair price. I bought it, but I’m not sold on the product. The overall feeding experience itself wasn’t anything special and actually pretty messy for what it was. There’s a reason that other raw food manufacturers freeze their portions in nuggets or patties; chubs are leaky and inconvenient to handle if you don’t use the entire thing at once. And since it was sold frozen, thawing it out rendered the convenience of a grab-and-go meal rather moot, for my purposes. 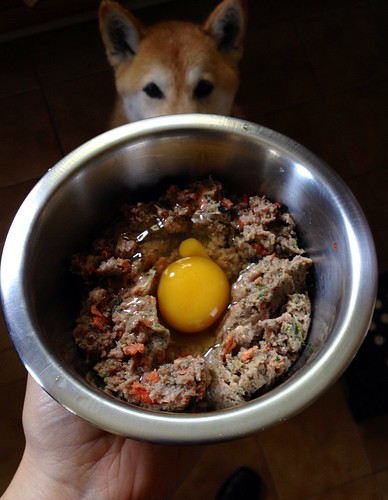 The dogs, of course, loved it, and digested it just fine. But honestly, I think I could prep them a better, fresher meal just as easily.

Anyway, the real fun this month was in treats. Aside from the usual chicken hearts, I introduced a new ingredient to the home dehydrator: pig ears! 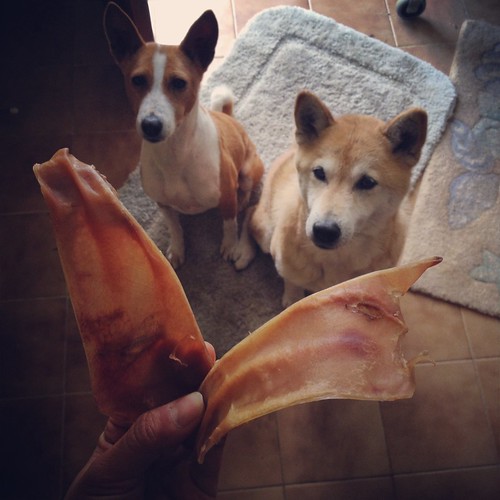 A pack of three very large ears at $3.39 a pound cost less than $4 at Ranch 99. The best part about doing it yourself is that I can easily trim each piece into less gluttonous, treat-sized strips before popping them into the dehydrator. I did leave them in for nearly 16 hours, which may have been overkill. They looked great on the other side though! Given that one whole ear can cost $3 at the pet store these days, this was definitely worth the time and effort. We’ll be doing this again for sure.